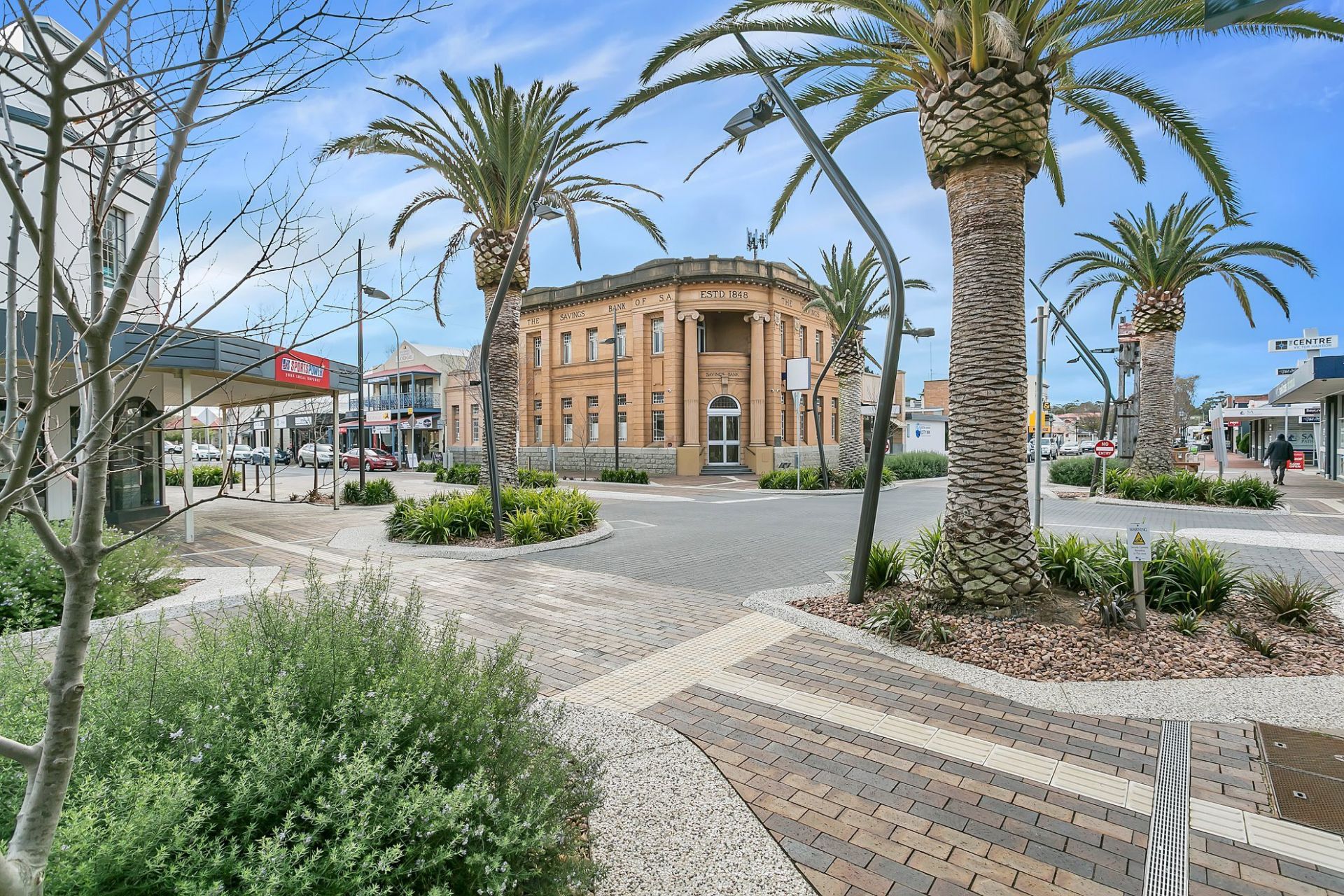 The Mainstreet Precinct Upgrade will see the heart of Victor Harbor’s Town Centre transformed into a vibrant public space that celebrates the town’s character, encourages more activity and improves links with other areas of the town centre.

The project will be undertaken over a number of years, and will be based on the framework outlined with the City of Victor Harbor’s Mainstreet Precinct Master Plan which outlines streetscape designs for Ocean, Coral, McKinlay and Stuart Streets.

In 2016, Council completed Stage One of the upgrade (the intersection of Ocean and Coral streets) and in 2019 Council completed stage two (extending from the northern entrance to Ocean Street to the end of Stage One). A community street party was held at the completion of each stage to celebrate the new public space.

Construction for Stage Three of the upgrade commenced in May 2020.

Council is currently working to finalise the design of Stage Four (southern end of Ocean Street including part of Albert Place). The project focuses on improved pedestrian usability, street greening (through street trees and planting beds) and improving the overall quality of the streetscape to reflect the Mainstreet Precinct’s importance to the community and its visitors.

Irrigation to plants, landscaping and furniture installation are now complete along the full length of Coral Street, and footpaths are now open. Construction of the timber pedestrian crossing over the railway is progressing and will be finished in the next two weeks.

The design for Stage Three of the Victor Harbor Mainstreet Upgrade has been finalised and construction is currently underway. Stage Three includes the eastern side of Coral Street right down to the foreshore.

The following resources have been developed to support Traders during the construction period:

The design themes and materials used within the first two stages of the upgrade will be carried through Coral Street to create a vibrant public space while maintaining vehicular access and increasing pedestrian and cyclist safety and connectivity.  Whilst the design continues to draw on the Southern Right Whale as inspiration with unique references to the majestic creatures found in the garden beds and landscaping treatments, it is intended for the design to gradually change and transform as it approaches the foreshore area.

The design also works to further highlight the heritage character of the Precinct and railway infrastructure by widening footpaths and creating more space and higher amenity around the numerous buildings along the street and into Soldiers Memorial Gardens. The foreshore area at the end of Coral Street will become a feature with the inclusion of a stepped amphitheatre that provides both seating and pathways, leading to a small boardwalk and steps, providing more of a connection with our beach. It will also turn an underutilised space on our foreshore into a multi-functional space for festivals and events.

The space will be brought to life through better lighting and the inclusion of public art.

Find out more about the design of Stage Three

Council has released concept designs for Stage Four and will be working with Mainstreet traders, building owners and other key stakeholder to finalise the design. Once the design is finalised the Council will work to secure grant funding to assist with the construction costs.

Stage Four will continue similar streetscape improvements as per previous stages and will focus on improved pedestrian usability, street greening and enhancing the overall appearance of the area to show the Mainstreet Precinct’s importance to locals and visitors.

Stage four includes the southern end of Ocean Street including the intersection with Albert Place.

The City of Victor Harbor has been progressively delivering the Mainstreet Precinct Upgrade since 2014.

With Stages One and Two of the Victor Harbor Mainstreet Precinct Upgrade complete, the Council has been focused on delivering construction works for Stage Three (Coral Street, from Ocean Street down to the foreshore on Flinders Parade) and finalising the design for Stage Four (the southern end of Ocean Street and Albert Place).

However, to keep the project moving the Council has commenced planning the design of Stage Five. Council recently agreed to a number of high level principles to help inform the project’s design direction and the preparation of initial concepts for the space. This is a process that Council has implemented for all stages of the upgrade.

The design principles focus on maximising the use of the space and increasing connections within the Mainstreet Precinct. In looking at the space as a whole, the Council did not want to be constrained by the location of the rotunda and is considering its potential removal.

Other significant principles include the removal of a number of car parks to expand the footprint of Grosvenor Gardens, new perimeter footpaths, connection with the Coral Street Art Space (and future Arts and Cultural Centre), relocating the bus stop from Stuart Street, and investigations into relocating the pedestrian activated crossing (lights) in Torrens Street further north.

The principles provide a broad direction for design concepts that will be used to engage with key stakeholders and the community. The design principles aim to make the best use of the public space, be a little adventurous, enhance interest and ensure that current uses are maintained and/or reinvigorated.

Central to the design, particularly Stage One, has been the analogy of the whale. Southern Right Whales are iconic to Victor Harbor, migrating to the area each year. This event has been a continuous part of Victor Harbor’s history and culture for hundreds, if not thousands of years.

The landscape and drainage system reflects the baleen plates of the whales that are used for filtering food. In addition the various planting beds form a distinctive organic pattern along the street, emulating barnacle clusters that form across the head of the whale.

The unique street lights represent the whale’s ribs, while some of the seating reflects the idea of whale bones.

Stage One and Two

The City of Victor Harbor appointed South Australian based company Outside Ideas to deliver Stage One and Two of the Victor Harbor Mainstreet Precinct Upgrade in 2016 and 2019 respectively..

These stages were part funded by the SA Government’s Places for People Grants Program.

A cutting edge, innovative sculpture has been installed and is making a statement at the Ocean Street entrance of Victor Harbor’s Mainstreet Precinct.

The City of Victor Harbor commissioned Fleurieu resident Karl Meyer, with the support of Exhibition Studios, to create his piece ‘Elemental’ as a part of stage two of the Victor Harbor Mainstreet Precinct upgrade.

A rigorous and detailed commissioning process was undertaken by council, starting with a State-wide call for Expressions of Interest which resulted in 13 submissions. Three artists were then shortlisted to provide detailed proposals, before Council endorsed Karl Meyer as the successful artist. Council was fortunate to have the assistance of its Arts and Culture Committee to help guide the process and selection.

Karl Meyer lives in Parawa and is closely connected with Victor Harbor and its community. Karl is an artist and designer who is recognised for creating original works that are intriguing, whimsical and inviting of inquiry.

The commissioned work ‘Elemental’ will provide an iconic, thought-provoking work of art for Victor Harbor. The piece is expected to create debate, ultimately growing critical understanding and preparing the community for future public art projects. Importantly, tourists will be exposed to the unique art work of a highly regarded South Australian artist, building the State’s reputation as a centre of cultural leadership.

The council has received 50% funding from the SA Government’s Places for People Grant Program for stage two of the Victor Harbor Mainstreet Precinct Upgrade, which includes the $80,000 artwork.

Further questions about the Victor Harbor Mainstreet Precinct Upgrade should be directed to Council's Strategic and Policy Planner, David Read via localgov@victor.sa.gov.au or (08) 8551 0500.